To begin with, this machine operates great with the i5 and i7 processors. However, the one we got our hands on has the i5 running at 3.1GHz. Our model also has 8GB DDR3 RAM and a 2TB hard drive.

The operating system is obviously Windows 7 with a promise of a free Windows 10 upgrade. The box comes with the Dell XPS 8500 unit and power lead of course. 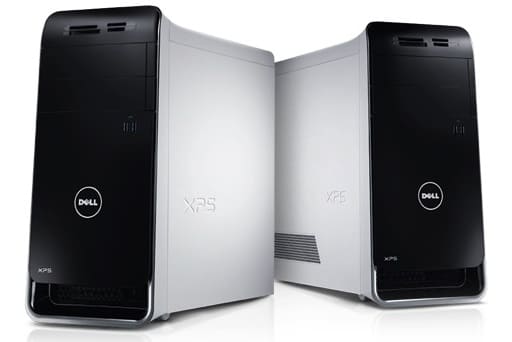 The looks are stunning with a white casing and piano black frontage. There are two USB3 sockets on the front of the machine and a further 2 at the rear. On the top of the Dell XPS 8500 sits 2 USB2 sockets and a headphone and microphone socket. Then there are the built in WIFI, Bluetooth facilities and card readers.

Together with its 4 core processor and 8GB RAM, we have a decent PC on our hands. In fact, we can’t really fault it. Basically, it is a decent desktop computer. When we installed a 120GB SSD, the machine became an absolute flying machine. Indeed, after this simple install, press the on/off button and the machine turned on almost instantly.

The machine has its own built in graphics and performance was overall very good for simple programming. Games would miss a frame or two but once we installed a 2GB graphics card, games were a breeze.

We updated the machine to Windows 10 and that’s where the only real problem occurred. We found that the machine would not turn off completely. In other words, the PC would appear to shut down but the fans kept on spinning. We solved this by installing an older version of the Intel Management Engine Interface driver to 9.5.24.1790. Apart from that we can only say this is a fine machine and well worth it. In fact, we thought the Dell XPS 8500 looked beautiful and felt solid.